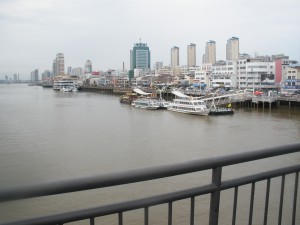 Dandong–The Chinese side of the Yalu River Border

The level of development was the most apparent difference between the two cities on the border.  Dandong, the Chinese side, was like any other city in that it has a developed infrastructure. There was no shortage of restaurants, hotels, and tourist sites. On the other hand Suifenhe, the city on the North Korean side of the Yalu River, was significantly lacking in most types of infrastructure save a Ferris wheel.  Basically the Chinese side looked it was constructed by one the world’s largest economies, while the North Korean side represented what development is like in one of the poorest nations in the world.  The silver lining to North Korea’s lack of development is that it lacks China’s pollution problem.

The museum is a celebration of the Chinese-North Korean partnership and its success at rebuffing “American aggression.” Chinese claims of American aggression were supported by disputed “facts” such as the war was initiated by America and that America used biological weapons during the Korean War. Visiting the museum provided an interesting insight into the Chinese and North Korean’s view of the Korean War.

This is my last blog post.  My professional work experience with the Department of State has been a great experience.  I would like to thank everyone who made this blog exercise possible. I hope this has been informative.