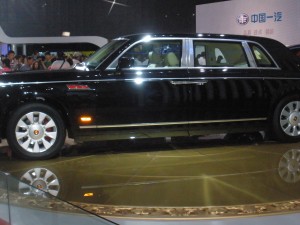 Last week I participated in another representational event, the Changchun Auto Parts Summit.  The Changchun Automotive Industrial Development Area (CAIDA) sponsored this function.  The purpose of this summit was to establish a relationship between Chinese car manufacturers and foreign automobile parts manufacturers.

Changchun is Jilin Province’s capital and is located about four hours north of Shenyang.  The city has been described as the “Detroit of China” because of its reliance on the automobile industry.  In fact, 70% of Changchun’s tax revenue is generated from the automobile industry or automobile related industry.  A great deal of that revenue is generated by the largest and most influential car business in town First Auto Works (FAW).

Several countries (Germany, South Korea, Japan, United States) sent delegations to the Summit.  We assumed that the American delegation would have a number of Automobile parts manufacturers present.  What we didn’t anticipate was a municipal government leading the delegation.  Oakland County, MI led and coordinated the entire trip for the Americans.  However, CAIDA paid all expenses (travel, food, and lodging) for the visiting foreign delegations except for government officials.    The American delegation alone was about 34 members but came at no expense to the Oakland County taxpayers.

(Let me clarify.  CAIDA paid for everyone except for the representatives from the Consulate.  It is a policy of the United States Government to not accept gifts or sponsorships of this kind.)

Trips like these represent one of several economic initiatives Oakland County’s Chief Executive L. Brooks Patterson endorses as a method to rejuvenate SE Michigan’s economy.  The economic situation in southeastern Michigan is well documented, however efforts (Emerging Sectors, Automation Alley, Medical Main Street) made to reverse the trend are seldom reported on as intensely.  The links above provide a little introduction to these efforts.

It was really interesting to see a local government involved in the international marketplace. It adds another dimension to collaborative governance which comes with both benefits and complications.  It is an interesting development that I would like to study further.