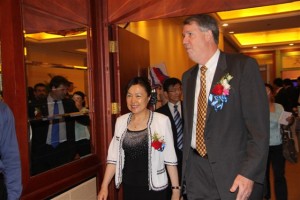 The 4th of July holiday celebration was a very busy time here at the Consulate.  I suppose you might be asking the same question I asked:

“What significance does America’s Independence Day Celebration have in China?”

The answer: Very little to the average Chinese person.

Luckily for us this celebration isn’t for the average Chinese person.  This party is for Provincial Governors, school officials, CEOs of industry, and other people of status.  This is the Consulate’s (and indeed the State Department’s) most important public outreach (representational) event.  Counterintuitively (at least in my mind) the celebration is regarded as an appreciation lunch for the Chinese well-to-do rather than a party for Americans on America’s Independence Day.

One of the most interesting situations surrounding the 4th of July celebration was the Consulate’s inability to pay for the celebration outright.  This was a result of the budget allocation, not from a lack of resources.  There just is not any money designated for the holiday celebration.  The Consulate must resort to fundraising.  The targets for fundraising are the American companies in Northeastern China.  Donations can range from money to food.  This year donations came from numerous sources, some of which were:

What better way to celebrate America than with a Big Mac and Donuts?

One of the most important things that I learned from the celebration was that to successfully network you need to have business cards.  It doesn’t matter whether you are a graduate student, musician, Starbucks manager, or an astronaut; people will not remember you without a business card.  From what I have gathered these representational events, which dominate a large deal of the Consulates’ time, are primarily business card exchanges.   The next time I am given the opportunity to purchase business cards I am going to do it.

Fortunately, because of the 4th of July holiday we had a three-day weekend.  Trying to figure out where to go and what to do was very difficult.  It was so difficult that I even asked for suggestions through this blog.  I ultimately decided to go to Qingdao, Shandong Province.

Qingdao is the home of Qingdao (Tsingtao) brewery, China’s oldest and most famous (but not the tastiest) beer.  Qingdao is an interesting city because it has been strongly influenced by both German and Japanese cultures, particularly in regards to architecture and city design.  Other things that made it noteworthy are the well-managed traffic and cleanliness.  This was noteworthy because it was directly opposite of Shenyang.  In Shenyang, the traffic is terrible, the air is just as bad, and the ground is filthy.  Coming from Shenyang, going anyplace would have been a welcomed vacation, even…Los Angeles.

Qingdao’s streets are wide and well maintained.  Drivers follow the traffic laws.  Nearly every 200 meters or so is a recycling/trash bin.  There is a 40km walking trail that parallels the shoreline, which is well maintained. There are several large parks, squares, and beaches for public gatherings.  Most importantly Qingdao has trees.  What more could you ask?   The only reason I harp on the aesthetics is because as much as I like Shenyang, it isn’t the most comfortable of places. That is actually why I like Shenyang.  Because as a basis of comparison literally every other place I have ever visited or will visit is better.  My appreciation for other places grows the longer I am here.