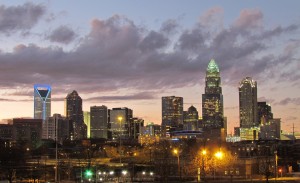 I still cannot get over the Charlotte skyline. This is the view I have on my way into work at the Government Center, coming into Uptown from the south. Even at a great distance, this city is absolutely arresting. And this is intentional. Charlotte’s attention to public aesthetics is a concerted effort, manifest most openly in the city’s public art ordinance. All over the Uptown area there are beautiful statues and interesting carvings. In fact, in the lobby of the Mecklenburg County Courthouse there is an astonishing installment of a human face hanging from the ceiling, made up of a series of smaller human head sculptures suspended from cables. It’s hard to describe, but it’s called “Persistence of Vision,” and it’s by an artist named Ralph Helmick. Check it out here and seriously, drop by the courthouse next time you’re in Charlotte. You won’t be sorry, provided your visit isn’t compulsory.

On Friday night last week, I went with Randy Harrington, my boss and an alum of the program, to the Charlotte Motor Speedway to see a NASCAR truck race. Another alum, Peter, who we ran into at the race, made me promise to note to all of you that the Speedway is not actually in Charlotte, but in Concord, NC, the next city to the northeast and his place of employment. Despite this fact, the Charlotte area is intense in its love of speed, hosting the Coca-Cola 600 and being the home of Hendrick Motorsports, in addition to many other NASCAR teams in the surrounding area. Though I am brand new to auto racing, I had a great time. Randy brought an extra set of earplugs, for which I was very thankful, as those cars are incredibly loud. Kyle Busch won the race we watched, the North Carolina Education Lottery 200, which featured a race-record tying ten cautions. This meant those guys were pretty consistently driving into the walls, and each other. The flames and sparks and smoke pouring out of their cars were the best part though. At work, I’ve had the opportunity to meet one on one with all of the budget analysts in Budget and Evaluation. Each of them are responsible for the budgets of their assigned departments, what Charlotte calls KBUs (key business units). The two main points I took away from those meetings were 1) there are many ways one can arrive in the budget office, and 2) I need to get better at Excel. Also, Carolina MPA degrees are quite handsome wall hangings. As are Carolina NCAA national championship banners. These will both be fixtures in my future offices.

I have been very impressed at how structured this internship has been. Each day has been a good balance of time for work and time for running around to meetings and going on tours (which will be picking up soon as I start going on ride-alongs in the coming weeks. I have one this coming Thursday with special services, the crew that keeps the Uptown area clean, at night during Speed Street, and they sent me an email telling me to be prepared for “chaos.” Very excited.) I’m making progress on my summer projects, devoting most of my time so far to a survey of the revenue structures of the top twenty-five most populated council-manager cities in the United States. It has been very interesting, as cities across the country have huge variations in the type and quantity of resources of which they make use. I’ll update you on this as I get closer to having a sense of the big picture.

One more thing about Charlotte and KBUs. As discussed above with respect to the public art ordinance, I feel Charlotte is a city that believes strongly in the power of words and symbols and presentation. Another way this ethic can be seen is in the use of “business” terms throughout the city government. The budget is not called a budget but a “Strategic Operating Plan.” Departments are “key business units” led by “key business executives,” rather than department heads. And the overall mantra of city work has been, for years, “run the business.” In fact, in the early 90s, Charlotte was the first government in the world to implement the use of a Balanced Scorecard to manage performance, a technique borrowed from the private sector. On the walls of the fifteenth floor hang framed prints of a visualization of Council’s five “Focus Areas,” which are broken down into “Corporate Objectives” for which the employees in the various key business units are responsible. Here it is on the left (sorry for the low resolution). Everything in the city is organized around this strategy. In fact, the Assistant City Managers, who in most cities would oversee some collection of departments, oversee the five Focus Areas (housing and neighborhood development, community safety, transportation, economic development, and the environment) the pursuit of which cuts across multiple KBUs. I am still figuring out the ways in which this orientation around Focus Areas results in a different governmental undertaking than the more traditional orientation around departments. And when I get there, I’ll be sure to report.

Watch the Coca Cola 600 and the Top Gear 300 this Saturday and Sunday and think of me and the special services crew, keeping Charlotte clear and clean so 207,000 people can pack into the Charlotte Motor Speedway, making it the sixth-largest city in North Carolina, and have a blast.