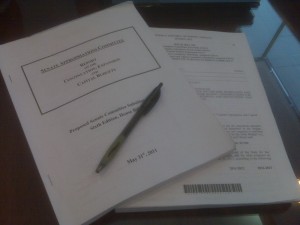 That is about the best way I can describe it.  The crossover deadline here at the Legislature has come and gone and fortunately (or unfortunately) I was afforded ringside seats for most of it.

Crossover week is one of the most important and busiest weeks on the legislative calendar with committee meetings starting at 8am and session often lasting as late as midnight.  Any bill that has not passed in either the House or the Senate by the crossover deadline effectively dies.  So if your bill hasn’t made it through at least one chamber, you have to wait for the start of the next long session, nearly two years, to start again.

Of course there are some exceptions.  Bills that made it through crossover can later be gutted and rewritten if some new legislation is required.  Bills related to state finances can be introduced after the deadline.  But for all intents and purposes, if it doesn’t survive crossover, it’s most likely not going anywhere.

The sheer number of bills up for debate was astonishing.  On Wednesday alone, 114 individual bills were heard in committee or during session, and that was only the House’s calendar.   Bills ranged in topic from Voter ID to medical malpractice, charter schools to gun and property rights.

With such a large number of bills passing through the halls, it is critical to stay focused.  Coffee and Red Bulls are in high demand.  For the large number of bills to pass through that did, a disciplined caucus is needed.  Steady support from leadership and a clear game plan are critical (some of which can be listened to here as the microphone was accidentally left on during the Republican caucus meetings prior to the final budget debate).

Pay attention to the details.

No greater example exists than the budget bill which passed the House early last Saturday morning at 12:15am.  Late last week I was given some pretty sound advice when it comes to understanding the budget: read the whole thing.  While I cannot say that I have made it through all 342 pages of the budget document, yet, that is exactly what Governor Bev Perdue’s staff is doing right now, going page by page, line by line, to make sure they fully comprehend its impact before she decides to sign it or veto.

With her decision looming in what appears to be the final scene of this legislative act, I hope to spend some time this weekend pouring through the details of the budget to get a better grasp of how budgeting in North Carolina really works.  Fun, right?

In the meantime, it will be interesting to see the Governor’s response to the chaos at the Legislature and if she can better coordinate it.