Home / Uncategorized / Ethan, The Snake, and The Dead Animal Guy

Ethan, The Snake, and The Dead Animal Guy 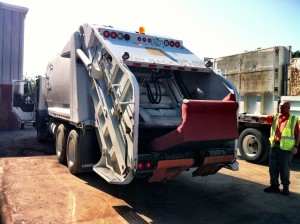 First off, I need to apologize for a little bit of a bait and switch. I ended last week’s entry by saying I was going on a ride along on the dead animal truck. Here’s exactly what I said:

“Next week I’ll have a run down on…yet another ride along, this one with the guys who pick up road kill (exciting!).”

So there I was last Thursday in the Special Services dispatch office, me and Ethan business casual in the early morning waiting for our assignments. Orange shirts were streaming in for the morning briefing and guys who recognized us from the last time we were there a few weeks ago all stopped by to say hey. Finally, Don Robinson, our guide to the city clean up operations during Speed Street, came by and told us that he had two trucks ready to go. One doing large item yard waste, the other picking dead animals.

Whatever the level of my prior bravado about experiencing all the esoteric operations the city undertook, I just couldn’t scoop crushed animals off the road. I asked Ethan if I could bail and stick with yard waste. He was fine with it. His family owns some farmland in Virginia. He’s told me he’s worked up there before. Maybe he thought that experience would help him. That was my rationalization, at least. I did whatever mental gymnastics were necessary. Don said, “If you work dead animals, no one messes with you. You get a newer truck and you get to just do your job. So long,” he smiled, “As you can do the job.”

And with that we parted ways. I felt a flicker of regret about asking him to take the dead animal truck. But I pushed that thought away and headed out with my guys to truck lot. Our ride is on the left below. I was back on a truck very similar to the one I was in last time when I was on yard waste. This time we weren’t on a route though. We were headed to specific locations all over the city where yard waste piles were too big for the regular trucks to tackle. But first we had to dump our truck, which was full of regular garbage. So that meant we were heading over to the dump, the Charlotte Motor Speedway Landfill.

Now the planners out there may be bored to tears by this, but I only recently learned about the level of granularity of zoning land use designations. I was aware of the big three: residential, commercial, and industrial. But below this are many subsets. It gets very detailed, but what’s relevant for us right now is the freest designation: I-2. Land that is zoned I-2 has the fewest restrictions on its use of any classification. That means you need I-2 for a landfill—or for a motor speedway. And as it turns out, these two things are right next to each other. It took a moment of double take for me to realize that my reaction to seeing the speedway (fun!) next to the landfill bearing its name (gross!) was needlessly dissonant. Both of the uses are high-intensity and rough on the environment. In short, it should be no surprise that the zoning designation used for the speedway is the same as that used for the landfill. We drove our garbage truck through a security checkpoint and up into the hills behind the speedway. As we crested I noticed a number of conspicuous plumbing installations in the middle of the rolling open spaces. I asked the driver.

“Those are methane taps,” he said, “The city sells the gas to make electricity.” “Wait, are we driving up a hill made of trash?” I said.

“Yessir,” he said and smiled.

Just like the last time, the truck driver’s commercial driving license did little to communicate just how skilled he was with that machine. We charged up and around those hills and finally made it to the part of the landfill that was accepting new waste. I saw a Mad Max-looking backhoe with giant steel wheels outfitted with horrifying spikes. It rolled back and forth over the trash, seemingly to pack it down. We spun our truck around and opened our back bay and spilled our guts. I stuck my head out the shotgun window and got this shaky view of it, below.

WordPress is being obstinate about not letting me embed this video. You’ll have to follow this link. Sorry.

We then rolled on out and picked up our oversized jobs. We picked up huge sections of trees and enormous clumps of branches. We would be at a site over an hour clearing everything. It was obvious to me that the guys with routes to finish didn’t have that kind of time to devote to one stop. They’d be out all night.

Our day was sweaty, coordinated, and quick. Before I knew it, it was mid afternoon and it was time to head back into the yard. I didn’t find Ethan there and it wasn’t until I saw him late that afternoon, after I had showered and returned to the Government Center in a shirt and tie, that I learned just how Hobbesian his day had been.

Ethan didn’t really want to go into it. He said he lost some of his innocence that day. Things had been seen that could not be unseen. He started by saying he had a whole new respect for the dead animal guy. They hauled a large expired dog out of a ditch. There was a cat. An opossum. All of them in the covered bed of the truck. It was hot. They drove around the city, ticking off job after job, while a few new locations came in over the radio. “Was today a really bad day?” I said.

“No,” he said, “The dead animal guy told me Monday is the worst, because the animals have been sitting out over the weekend.” He shook his head. “This wasn’t even a bad day.”

PS. This isn’t related to anything above, but I didn’t really want to leave you on that macabre note, so below is a guy who was ahead of me one day on my commute into Uptown last week. A little bit of Newport Beach out here in North Carolina. One Response to “Ethan, The Snake, and The Dead Animal Guy”