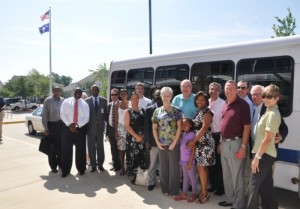 To attract private investors, appeal to developers, entice tourists, stimulate the economy, and enhance the lives of all its residents, the City of Columbia is proposing various tax increment financing (TIF) projects for the Innovista and Columbia Renaissance Redevelopment Districts. I took a bus tour with the City of Columbia Council, Richland County Council, and Richland School District One Board to understand the proposed TIF projects and discuss the city’s plan for ensuring their successful completion.  Once I understood the city’s plans, I then composed an article for the public, informing them of the proposed projects and how the changes will positively impact their lives.  My interaction with the elected officials and other public administrators taught me much about the decision-making process and how public investment, appearance, and infrastructure largely impact private investment.

During the tour I spoke with many elected officials about their opinions of the proposed projects and how it will directly impact their district and constituents.  City of Columbia Councilwoman  Tameika Isaac Devine expressed her concern about the large number of vacant lots in downtown Columbia and is a major supporter of attracting private investors. She, however, understands that “without public investments, the chance of attracting private investors is slim”.  Councilwoman Devine, therefore, supports the projects and is confident that by the City of Columbia taking this first step, developers and investors will surely follow.

During this brief interaction, I quickly understood the importance of creating an appealing environment for developers and private investors.   I also understood the thorough, comprehensive plan the city has proposed. To attract potential developers and private investors, the city performed extensive studies about what characteristics will entice these groups.  They then developed their projects based on the results.  Based on their findings, the City of Columbia proposes projects that will highlight historical ties, reduce vacant properties, improve infrastructure, create a pedestrian path system, and improve housing conditions, among a panoply of other benefits.

I really enjoyed this week because I never once expected that I would receive a real-life crash course on community and economic development in Columbia, South Carolina.  This experience has sparked a personal interest in community and economic development that was not originally there.  I am also now interested in the decision-making process and how elected officials reach their conclusions.  I look forward to having more interaction with the city council in the near future and learning more about the varying factors that affect their decisions.