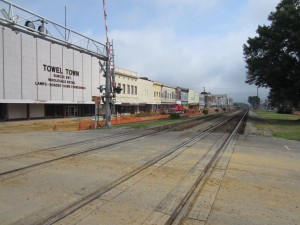 Public Works is often one of the larger departments in a city. They are the folks responsible for picking up refuse and recycling, fixing roads, maintaining city properties . . . the list goes on. As the Public Works Director in Rocky Mount is fond of saying, “If there is a task that needs to be done, Public Works is often called upon to do it.” The Director was kind enough to give me a quick tour of Rocky Mount Public Works, so put on your hard hat and come along for the ride!

First stop was downtown, where a massive street-scape project is going on. The city is giving the downtown area a facelift, replacing all the streets and sidewalks, and planting trees and flowers. As you can see, the railroad track runs right down the middle of Main Street. The city is having to negotiate with the railroad company to do the construction.

Next stop is fleet maintenance, where the city maintains its large fleet of vehicles (over 500!).

This second picture of fleet maintenance is a hydraulic lift for buses. . . this ain’t your daddy’s garage!

You will see a lot of garbage trucks in the next picture, taken at the transfer station. This is where the city’s refuse and recycling trucks, as well as private haulers, bring their loads. They dump their loads into a pit or onto a floor, where the refuse is collected and transferred to other trucks to be hauled to a landfill.

Finally, these are some cool new trucks the city has acquired. Instead of separate trucks for hauling or laying down salt during snowstorms, the city has invested in several trucks with interchangeable gear to serve different purposes. Cool!