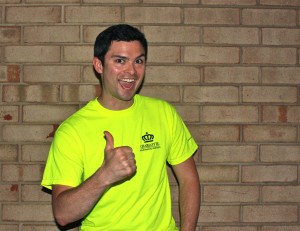 Solid Waste is really the unsung department of city government. They don’t get the dap that Police and Fire get, and their work is very physical and out in the heat and cold. But man, do they get the job done. I had a ride along with Solid Waste this week, and though I don’t see it as a potential career, I had a blast.

My Thursday began at 6:00 in the morning at Starbucks, where I was surprised to see the same staff there that I normally see at 8:00. The revelation that their workday started even earlier than mine gave me a bit of pause when it came to any sort of discontent about being up so early. I scooted on up Providence Road to the City’s Otts Street Solid Waste Facility, a large, new building down the street from a Kellog’s cereal factory which advertised it’s commitment to worker safety on a large banner hanging on the front of the building.

I parked in a nearly empty city employee parking lot across the street from the main city building. Out in front I met up with Ethan Smith, the intern from the City Manager’s Office, who will be my partner on a number of these ride alongs over the summer. Ethan is from Waynesville, NC and is just about finished with his MPA from UNC Charlotte. He and I were shooting the breeze, waiting as a steady stream of solid waste workers in bright yellow reflective vests made their way into the building, when I mentioned to him how strange it was that the parking lot across the street was so empty.

Ah, I had forgotten not everyone went to work as early as we were, today.

After everyone had arrived, all of the workers packed into an auditorium in the building and we were given a brief lesson on safety. When are garbage trucks most dangerous? In intersections, near intersections, and in parking lots. Be careful out there. After a little while, Ethan and I got our assignments: yard waste. I met up with my crew, Lamont and Sam, and we headed down the street to the garbage truck parking lot, where I met our horse for the day. Most of the garbage trucks in Charlotte are of the “one-armed bandit” variety, meaning they have an external, mechanical arm that grabs trash cans and lifts them up in the air to dump into the top of the garbage truck. Yard waste, on the other hand, uses the older, back loading, “compactor” trucks, where a crew of guys tosses stuff in the back and those huge pneumatic pistons you can see up there crush everything up toward the front of the truck.

The collection of yard waste went about how you might expect: we drove off, all three of us in the cab, yellow vested and gloved, to the neighborhood to which we were assigned and started looking for yard waste people had left out in front of their houses. I’d estimate that maybe one in every ten to twelve houses had stuff for us to pick up, but some people put out a lot. We’d drive up to it and hop out and load it in the back, all the while periodically running the crusher to smash everything into the holding part of the truck. Then we would jump back in and head to the next pile. Whenever we saw little kids though, the driver would honk the horn and the kids would go nuts, jumping up and down and squealing. As Lamont said, “Little kids love garbage trucks.” We were out for about five and a half hours and hauled 7.27 tons of yard waste. Watching that truck empty out its guts was an interesting sight, because the yard waste came out chronologically, and I saw my entire day’s work, in reverse, come out the back. (“Oh look, there’s those pricker bushes. And all that ivy!”)

But then I had to say goodbye to my solid waste friends, and head home to shower before coming back to the Otts Street Facility for another ride along that evening with Special Services, out in Uptown Charlotte during the first night of Speed Street.

Speed Street is hosted in the middle of Uptown on the days leading up to the running of the Coca-Cola 600 at the Charlotte Motor Speedway. The event shuts down several of the main streets in the shadows of some of the tallest buildings in the city. There are lots of vendors and two giant stages blasting out live music. Ethan and I were back together hanging out with Don Robinson, another UNC Charlotte alum (though not an MPA), who was in charge of the whole clean-up operation and a lot of fun to talk to. First, Don put the two of us in this shirt, which you can see on the right. I really don’t think the photo accurately captures just how fluorescent yellow it was. Then we loaded up water bottles in his truck and headed Uptown. The Special Services division of Solid Waste is responsible for keeping Uptown (and some other parts of the city) clean. That means litter removal, dead animal pickup, street sweeping, and, during large events, clean up during and after. Don showed us their plan of attack, having Special Services workers moving around the event picking up litter and emptying trash cans. We dropped off the bottled water we brought behind a large set of dumpsters, so the workers could catch a break and a drink. Throughout our time there, I was struck at how many police officers Don knew by name. He told us that Special Services and Police work together on a lot of events and that, over the years, he’d gotten to know some of them. This was interesting because Charlotte’s “run the business” ethic seems to keep most of the other departments more-or-less autonomous, providing few instances for interaction. I liked walking around with Don though, saying hey to all the cops, making sure all the trash was picked up and that all the people at Speed Street were able to have a good time. It was a great public service feeling, because though we made the event run smoothly and despite our bright yellow shirts, no one really noticed we were there.