The One Where I Do Donuts In A Fire Boat 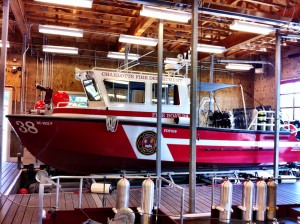 Over the past two weeks, I went on my police and fire ride alongs. Unfortunately, meting out justice to the bad guys required all of my attention and I wasn’t able to take any photos while I was out on the beat. I also missed  seeing a guy get tazed after he smashed up his girlfriend’s apartment. I missed it by this much. I was, however, able to keep the peace by patrolling the streets of this fair city pulling over speeders. 46 in a 30? You’re going down buddy. Here’s a ticket. 52 in a 35? Don’t act surprised. It’s insulting. Ticket. 45 in a 40? Carry on citizen. But I’m going to run your license plate just in case to see if you have any outstanding warrants. Clean. Go about your business.

Fire, on the other hand, was a different adventure entirely. This is how the day went.

8:00 Picked up in front of the Government Center along with Ethan, two people from the CMO and two people from corporate communications. Pile into large fire department van with air conditioning blasting, because it is sweltering.

8:15 Arrive at fire academy training facility. Yet another city facility with a view of Uptown. You’re welcome, bankers! We’ll keep you safe! 8:20 Walk through the guts of the fire training tower. Through the smokey, sooted, black-walled maze that fire recruits call “Smuggler’s Den.” (Not really, but they should.) Actually, several of the training courses had sardonic names, like the “Fun House,” which was a large pile of broken pieces of cement, its rebar bones twisted and reaching out like tentacles, that the recruits had to crawl through in a search and rescue simulation, and the “House of Pain,” a long stretch of cement that led to a cavity where a refrigerator would be inserted. The recruit would then use a torch to tunnel through the helpless appliance to reach the simulated victim. These courses were all run once a year. You got it, in the early summer. Why? I have no idea. But rest assured that no City of Charlotte fire fighters will be hired on with an aversion to heat. They simply wouldn’t make it through the training.

9:00 It is now time to cut and tear a car to pieces. This was a simulated wreck– and a bad one. I mean look at that car. We each took turns using the Jaws of Life to rip all four of the doors off our ill-fated Buick LeSabre. I liberated the rear right door. We then set to sawing off the roof. That was mostly Ethan’s handiwork with the jigsaw, as you can see from the self-satisfied grin on his face. But no, our invisible wreck victims were still trapped, the dash of the car smashed down across their laps! In no time we freed them from even that perilous situation, with the aid of some very powerful pneumatic pistons. 10:15 Enough with these terrestrial crises! We left the training academy in our big, air conditioned fire van, bound for Station 38, the fire facility by the sea, er, lake.

10:30 At Station 38, on the banks of Lake Wylie, life moves at a different pace. A better pace. A pace regulated by the twin outboard motors on this 24 foot aluminum beast. We set Big Red in the water (another nickname for a fire department capital asset that I’m trying to make happen) and idled down the shallows toward deeper water. Then, we opened it up. I spent most of my time enjoying the wind and the water at this point, but I did take this photo of our wake to give the nautical ones among you, dear readers, some sense of how we were doing. I realize its no speed boat, but we went a lot faster than I expected. Once out in open water, we tried out some tricks. First, our fire fighting apparatus, from the lake itself at 2,700 gallons per minute. And yes, we asked if they ever get fish sucked up and shot out of that thing. The answer is no. And finally before returning to Station 38 for lunch with the whole fire crew, we ran through a few agility maneuvers. Back and forth, concentric circles, and donuts on the water. It was awesome. Here’s an idea of how tight the turns were. And then it was back to reality and we returned to the Government Center. Excel!

One last thing: yesterday was also a council meeting day and this is the second time this has happened. I was trying to save the protesters for a post unto itself but that doesn’t seem to be happening. The people waving signs at the City Council are the “pro sidewalk” contingent of the “Should the city build sidewalks in this one neighborhood?” issue. They ended up getting their request.