Home / Uncategorized / The Story of Trash

The Story of Trash 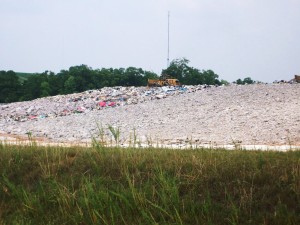 Note: Clicking on the photos in this post will enlarge them for more detailed viewing.

This week I had the opportunity to tour a few Wake County facilities that take care of solid waste. Before starting the MPA program I had never thought about the significant role many local governments play in collecting and disposing of trash and other waste generated in their jurisdiction. Since my only previous exposure to landfills had been the kind of unregulated, public trash sites that are often found near slums (as depicted in movies such as Slumdog Millionaire and City of God), I found this tour quite informative.

As Gus explained in a post several weeks ago, many North Carolina municipalities have solid waste departments that hire workers to drive around and collect trash and other waste from peoples’ houses. As important and strenuous as that activity is, what happens to the all that solid waste once it has been picked up by the garbage trucks?

If you live in Wake County, your trash takes one of two routes. It is either taken directly to the South Wake Landfill (located near Holly Springs), or it is taken to a transfer station where it is then compacted and transferred on to tractor-trailers that make the trip to the landfill. The Landfill property/infrastructure is owned by the County but operated by a private contractor. The transfer station is owned by Raleigh, operated by a private contractor, but overseen by the County through an inter-local agreement.

Both the transfer station and landfill charge a ‘tonnage fee’ based on the weight carried by each truck that goes through the facilities. The revenue generated by these fees is used to pay the contractors and finance capital debt associated with facility construction, among other things. About 2,000 tons (equivalent to several hundred elephants) of trash is brought to the landfill each day.

Wake County also collects a large variety of recycling materials through municipal solid waste collections, as well as about a dozen collection sites throughout the county. These materials are sold for nominal fees to private recycling companies.

Materials such as yard waste and building demolition/construction site waste is taken to specialized private landfills such as the one visible below. As a side note, this photo was taken from on top of a 100+ feet high hill of trash at the South Wake Landfill. Since this particular trash site has been retired, it now has a soil/grass cover and provides some very nice scenic views from the top.