It was a HUGE week. I’m talking a massive display of local government budgetary wizardry.  Last week the sleepy beach town of Pine Knoll Shores hosted the North Carolina Local Government Budget Association’s (NCLGBA; boy that is quite an acronym) Summer Conference.  The three-day affair (July 11-13) discussed economics, strategic planning, politics, local government civic engagement, and, of course, budgeting.  This was my first time attending a NCLGBA conference and the prospects of the conference were an enigma to me.  I had no clue where to set my expectations, who to seek out, or what breakout sessions to attend; in the end, none of that really mattered.

The biggest takeaway that I had of the entire event was how this community of local government budgeteers were so similar despite being so different.  I knew that there was a self-selecting group of people in attendance and that undoubtedly skews the conclusions that I am about to lay out, but suspend that suspicion for a moment.

The 150+ attendees came from dozens of communities across North Carolina; communities big and small, with elected officials all over the political spectrum. Our respective counties or municipalities may have been wildly different, but the jokes we told, the frustrations we had, and the innovations we were fighting for were all the same.  We were a cohesive group who shared experiences, lessons learned, and new ways to tackle problems as if we had been working side-by-side.  Budget really does suck you in, and when it does, you become part of a surprisingly lively professional club.

For more information about NCLGBA, check out their website here: http://nclgba.org 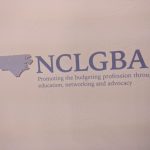 The NCLGBA branding is strong 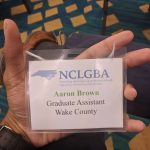 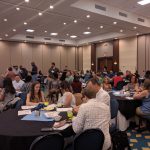 A view of the room. Attendance was huge!. 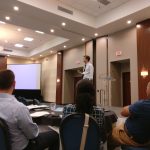 Prof. Chris Cooper of WCU giving us the political breakdown of of North Carolina 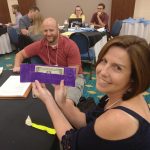 An incredible duct wallet made during a team building event. 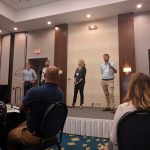 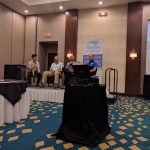 A live recording of the NC League of Municipalities’ Podcast Municipal Equation
Comments are closed.