The second week of my internship at NC DPI presented opportunities to speak with staff members who are working closely with the NC Race to the Top initiative, which was an interest of mine prior to beginning my internship. However, before learning more about the work being carried out in response to funding received through Race to the Top, it was important for me to learn about the Leandro v. State of North Carolina case, which changed the face of public education within the state of North Carolina.

In 1994, an academically-gifted student was concerned about being under-prepared for the competitive college admissions process, as he realized his peers at other schools had AP courses at their disposal, while he did not. Later, a lawsuit was filed on behalf of students and parents from five low-wealth counties within the state. After this case was heard in the state Supreme Court, in 1999, Judge Howard Manning ruled that every child in the state of North Carolina had the right to a “sound, basic, education.”  Since the ruling, more funding has been allocated to  low-wealth counties to ensure economically-disadvantaged students receive the same exposure to academic content as schools  within more affluent districts. This case also continues to impact the way the Department of Public Instruction carries out its work (for instance, the Academically and Intellectually Gifted initiative was established to meet the needs of students similar to Leandro), and Race to the Top funds assist DPI in carrying out the agency’s initiatives with greater efficacy.

On Monday, I had the opportunity to sit in on a district and school transformation evaluation meeting, and learned the current district and school transformation evaluators are working to identify factors that position districts for success during the transformation process, and how these factors can be addressed to increase the number of targeted schools moving off of the list of turnaround schools, that is, schools with less than sixty percent of its students assessed as being proficient in tested subjects. Because district and school transformation is a behemoth of a topic, our intern research team has had difficulty identifying a manageable research question that has not been answered by DST’s evaluation team. However, our team has also digested  information about the operations of North Carolina Virtual  Public Schools (VPS), and is studying the performance discrepancies between high school students who enroll in VPS courses, compared to those taking all of their courses in traditional classrooms. Our study also intends to address the issue of access associated with virtual  public education.

While working at NC DPI, I have found myself inspired by the mural on the outside of the DPI building. The mural captures the spirit of public education. One of the many quotes reads, “You are a child. You are suitable to be awed.” The magnitude of this quote calls for constant reflection, and serves as a reminder for the daily work of staff at DPI. I met a former principal who currently coordinates the evaluation of charter school performance throughout the state, and his anecdotal explanations of why he is committed to his work embody the weight of this statement. 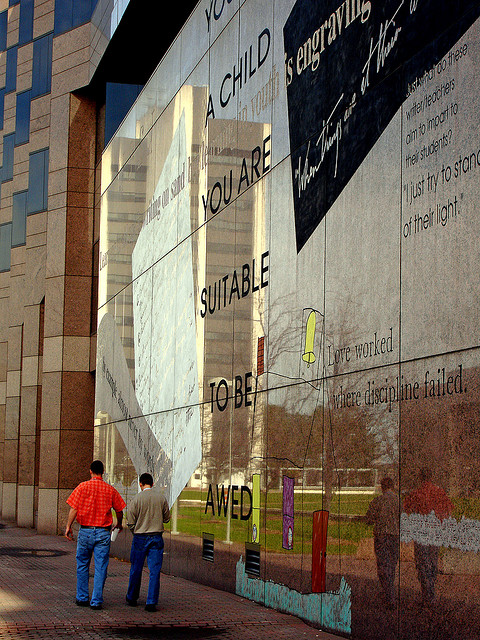 Thanks for reading, and stay tuned for next week’s post.