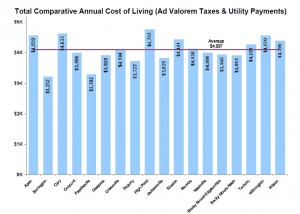 After a brief sojourn to the realm of public affairs, it’s time to return to the land of budgeting. One of the things I like best about budgeting and evaluation is that it provides local government staff and elected officials with solid information. It helps back up or refute claims and facilitates informed decision making. This was especially true a few weeks ago.

As I mentioned in a previous post, the Rocky Mount City Council was considering a modest property tax increase. It did pass a budget with the increase last week, but it was not easy to get there. As any City staff member or elected official will tell you, one of the chief complaints about Rocky Mount is the high electricity rate (the City provides electricity to most of residents. There are a lot of historical reasons for this, but that’s a whole other blog post!). Some people believe that the electricity rate makes the cost of living in Rocky Mount prohibitively high, and thus they are vehemently against any tax or rate increase.

The truth is, electricity is a little more expensive in Rocky Mount. But electricity is only one piece of the puzzle. When considering the cost of living in a given area, you have to take into account many factors, only some of which are in a local government’s control. To that end, I gathered city and county property tax rates and utility rate information from 16 other comparable municipalities in North Carolina. This included electricity rates, water and sewer rates, stormwater rates, and trash and recycling fees. Using a median home value for each place and a standard amount of utility usage, the Budget Manager and I conducted a fairly accurate cost of living analysis comparing Rocky Mount with the other cities. As it turns out, even though Rocky Mount has a higher electricity rate than most places, the overall cost of living is actually fairly low (even with a property tax increase). Of the 18 municipalities in the cost of living analysis, Rocky Mount (Nash County) is the 5th cheapest place to live, and Rocky Mount on the Edgecombe County side is the 7th cheapest. We had to do two COLAs for Rocky Mount because it straddles two counties, both of which have different property tax rates. Our COLA may not be 100% perfect, but it is much more accurate than comparing communities on only one measure.

The moral of this story is that things aren’t always as simple as they seem: you often have to dig a little deeper and take a more holistic view to get closer to the truth. The other moral of the story is that the budget office is one of the coolest places to work in local government!

If you are interested in reading the full COLA report, you can do so here:

My next blog post will cover a very “hot” topic, so stay tuned, folks.