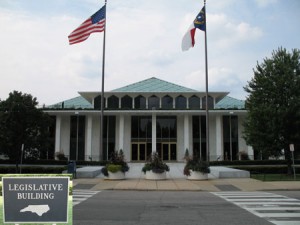 On Wednesday, May 30th, close to 275 county commissioners, county managers, and other county officials visited Raleigh for the annual County Assembly Day. The day was jam packed, with visits from the Speaker of the House, Thom Tillis, President Pro Tempore of the Senate, Phil Berger, and two political strategists representing both the political left and right. Guests were also briefed on the priority issues affecting counties during the 2012 legislative short session by NCACC staff, after which they descended on the legislative building to meet with their respective legislators.

Despite this being my third full week with NCACC, and the many opportunities I have had to  listen in on weekly manager’s calls and discussions with county commissioners, a small part of me was still curious as to how this entire association functions. Do commissioners from all over the state really agree to one set of legislative goals? Do they really find ways to work together with both majority and minority leaders in the house and senate, despite their own political persuasions? Everything in me told me that this could not really work out.

Of course, I was proven wrong. It isn’t that these county commissioners forget their political leanings the second they stroll into Raleigh. That much was evident the second folks stepped through the door. However, they do look past their own preferences and understand the need to work together to further North Carolina counties. At times, they need a bit of a push from the NCACC staff, as Executive Director David Thompson showed in his “Charge to the County Commissioners,” but the commissioners are inclined to work together on these sets of issues. Personally, I found this to be an incredibly refreshing environment. More often than not, we’re so caught up in our own biases that it creates this massive amount of gridlock where nothing is ever accomplished. It is impressive to see what can be accomplished through these partnerships and connections.

I also spent a large portion of the day listening in the gallery as the House of Representatives went through close to 20 amendments to their proposed budget, which eventually was passed. For the purpose of NCACC, the three main legislative priorities of lottery funds in the budget, the human services flexibility bill, and the county broadband public/private partnerships remain on the front lines. While the house budget reduced the expected lottery funds for counties to $100 million (equal to the previous year’s allotment), there remains hope that this number will not be reduced any further. The human services flexibility bill is actually on the agenda to be heard in the House Health Committee today (10 am!).  Needless to say, there is plenty of excitement in the NCACC office this week. Next week, I hope to be able to provide updates on S433 (human services flexibility) and any other developments that may have popped up in that time.